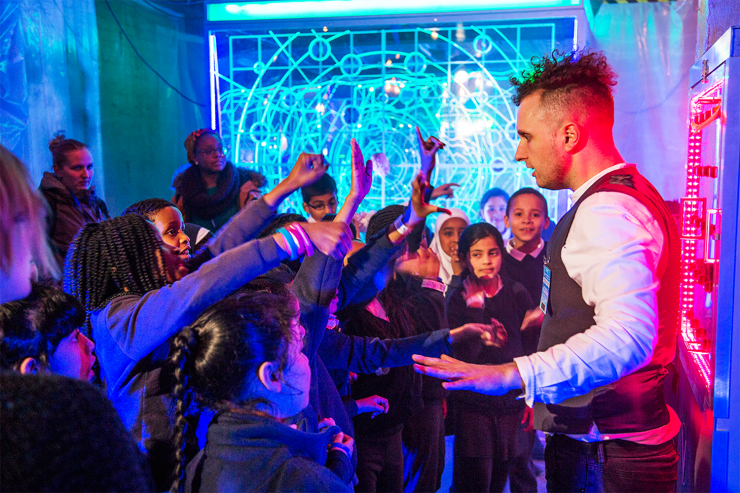 We’re Stuck! was interactive theatrical adventure for children aged 8-11 and their accompanying adults, developed by theatre-maker Sarah Punshon with a team of creative and scientific collaborators. The show took audiences through six different spaces as they explored “Volcano Industries”, a top-secret Artificial Intelligence research facility that develops cutting-edge robots controlled by neuron-computer hybrid systems. The audience were cast as “Professors”, who had to help “Dr Dikita Dey”, “Dr Bernard Fenugreek” and “Dr Ernest Volcano” overcome the evil plans of the head of the institute, “Dr Astrid Volcano”.

After an initial development phase in 2014, working with China Plate Theatre and One Tenth Human, funding was secured from the Welcome Trust, Arts Council England, Shoreditch Town Hall, Z-arts and Manchester Science Festival to develop the full show via school and family workshops in London and Manchester during autumn 2015, and produce it at four different venues in London and the Northwest, 16 March – 16 April 2016.

“It carried an important message about it being acceptable and beneficial to get things wrong, a concept which they often struggle with.” Parent comment on theatre piece, 2016