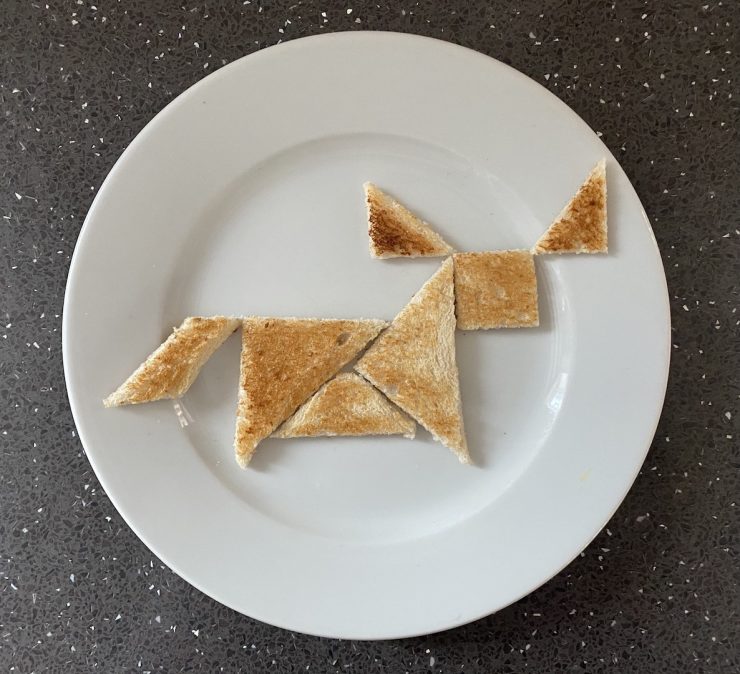 Chinese New Year, also known as Spring Festival, is an annual event that marks the first day of a new year on the Lunar calendar, when there is the start of a new moon.

The date changes each year but always begins between 21st January and 20th February and this year it falls on Friday 12th February.

This year is the year of the Ox. Traditionally, each year is named after one of 12 animals that feature in the Chinese zodiac, so each animal will have a year dedicated to them once every 12 years! To celebrate we’ve come up with a special Tangram Ox Challenge.

How to take part

You can download the Tangram Ox template or make a tangram out of toast (by watching one of our very first ‘How To’ videos!).

You’ll find everything you need in the ‘Resources’ section at the bottom of this page. And don’t forget to send us a picture of your tangram ox – email it to us info@mathsontoast.org.uk or tag us on social media @mathsontoast

2021 is the year of the ox, the second animal in the Chinese zodiac.

You may be thinking, why second? Well, according to the myth, an important god called Jade Emperor organised a race for twelve animals: a pig, a dog, a monkey, a rooster, a snake, a horse, a rat, a sheep, a tiger, a dragon, a rabbit and an ox.

The emperor decided to name a year in the zodiac after each animal and used the race to determine the order each animal would be placed.

The cheeky rat asked the ox if it could sit on its head to cross the river and instead of saying thank you when they reached the other side, the rat made a dash for the finish line and beat the ox to first place!

We think the ox was the true winner. To celebrate ox’s year, take part in our Tangram Ox Challenge!

Watch our 'How To... Make a Toasty Tangram' video